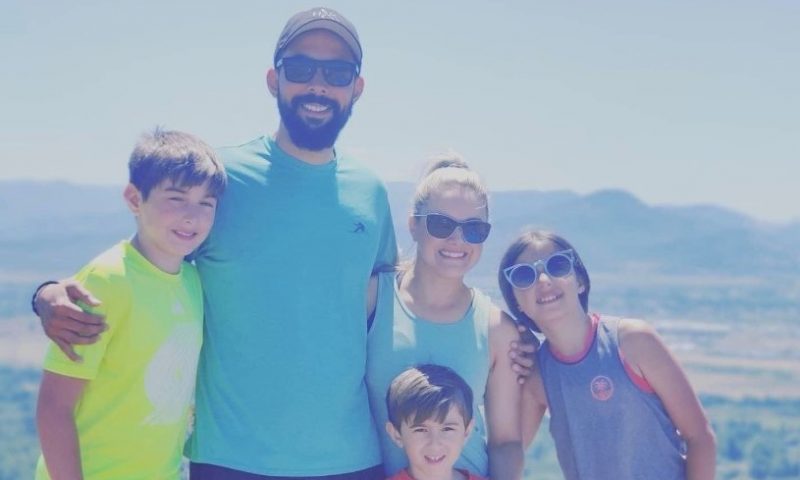 Hello fellow GBC’ers! I hope that you are all doing well, and staying safe and healthy. Josh reached out to me and asked if I would like to share my thoughts about race and justice in our country and how I’ve been processing everything that is going on. This issue that our country is facing has been on my mind for most of the summer, and is something that I’ve been wrestling with for the past 3-4 months, so this could be lengthy.

For those of you who don’t know me, my name is Nick Hudson and most of you know me by my nickname “Butch”. My Father, Ron, is an African-American man who grew up in a very racially segregated area of Sacramento, CA and moved to Portland in the 1970’s to attend college at Warner Pacific College. My Mother, Angie, is a Mexican-American woman who grew up in Juarez, Mexico and was adopted at the age of 16 by a White Christian woman who lived in Ashland, Oregon. When my Mother finished high school, she moved to Portland, also to attend Warner Pacific College and the rest as they say is history!

My lovely wife, Kasey, asked me a good question as I was collecting my thoughts to write this. What is it, specifically, that you’ve been struggling with as you process everything happening in our country? To be honest, it’s a lot. There are issues of race and injustice, a political system that leaves me feeling un-represented, and general apathetic feelings towards our country. Don’t get me wrong, I realize every country has its problems, and there’s not another country that I’d want to live in right now, but my level of patriotism is pretty low.

It’s in this state of apathy, frustration, and despair that I’m reminded of my calling to Christ. I have been reminded of the importance of being grounded and centered in my faith and seeing what the Bible has to say and how it is still living and breathing today. A verse that comes to mind is Psalm 27:14.

While I’m reminded that this earth is not our home, I do know that our calling here on earth is to be the salt and the light in a dark world. Another verse that comes to mind is Jeremiah 22:3.

Thus says the Lord: Do justice and righteousness, and deliver from the hand of the oppressor him who has been robbed. And do no wrong or violence to the resident alien, the fatherless, and the widow, nor shed innocent blood in this place.

I’ve continued to wrestle with how to accomplish this calling. How do I live true to my belief that black lives matter, because I believe they do, without supporting the organization BLM? How do I support police, including my police friends, and at the same time, acknowledge that some level of reform is needed? How do I vote responsibly and true to my faith, knowing that there is currently no candidate that fully represents the morals and ideals that I believe should be manifest in our country? To be honest, I don’t have those answers.

One of my favorite artists, Lecrae recently released a song that captured how I’ve felt at times during this summer:

Look at these people found dead in the streets

I got some partners that hate the police

Me I'm just trying to hold onto my peace

'Cause I'm liable to lose it and go get the piece

I need a reason, I need a season

Pleaded with Jesus, all of this grieving

They be like F U and what you believe in

Ain't no JK when I'm talking to God

Don't need a reason to open my eyes

Uh, yeah, I've been doing better than I was before

Thought I lost my grip but God reminded me it's holy

I've been trying not to go off the deep end

Give me a reason

One question that I’ve thought about a lot in this current situation is, “What Would Jesus Do?” How would Jesus be responding to everything that is happening in our country? Would he (Jesus) be welcomed in our country? Would Jesus be judged for spending time with people that don’t fit in the norm? As Pastor Josh Howeth told us, Jesus was the perfect example of grace and truth, and that is a calling that I think we should all aspire to as believers, even though we know we will fall short.

My older brother and I have always called ourselves “Blaxicans” based on our unique racial makeup. Having a father with an extremely light-hearted personality, especially when it comes to race, has been a blessing for me! I have always been aware that I don’t quite look like one race. My brother has darker skin than me, and he has tight curly, coarse hair. My hair, as I say, is more Mexican, looser. When I was in elementary school, there weren’t many kids in our area who were diverse. In the 5th grade, a new student, who looked Black (he was also multiracial), came to our school, and was met with racist comments from many people, some I considered friends. I remember this was the first time that I had heard someone called a nigger. I didn’t even know what the word meant, but I knew that they were calling him that because of how he looked. This might have been one of the closest times I’ve been to getting into a fistfight, and that new student became one of my close friends as we grew up together.

Aside from that memory in elementary school, I consider myself fortunate to have grown up in an area that has accepted me for who I am. However, like I’ve told many people who have asked me for my thoughts about race (which I appreciate), I am only one person, with one unique experience, my own. As a public school teacher and coach, I’ve felt a calling to not only represent Christ, but also the minority segments to which I belong. I might be the only minority that some of my students have ever known or talked with at this stage of their lives, and I think that carries a certain thoughtfulness and responsibility that I am happy to carry.

In late February, Ahmaud Arbery was murdered. Like many people, I didn’t become aware of his tragic death until swelling unrest led to the arrest of those responsible for his murder. Like many of you, I was hit hard by his death. Over the last 15 years, as a PE teacher, I feel that I have a responsibility to live out a physically active lifestyle and I enjoy running and biking outdoors frequently. On Facebook, I posted that I have been pretty fortunate to have had positive experiences in my community, and most people are very friendly to me. But there are times when I wonder what people are thinking about me as I jog through their neighborhood. This isn’t a new feeling for me. When the news continued to cover the horrific murder of Arbery, a painful realization sunk in. This wasn’t just some anonymous young man who’s life was cut short by vigilantes. This tragedy could’ve happened to my brother, who frequently runs around town, or my Dad (when he was more physically active), or former teammates and friends (who are teachers, coaches, family men), or myself.

Later, when George Floyd was murdered, I was kind of a wreck. My family saw the hurt that I was experiencing and it had an effect on them also. Then I learned of Breonna Taylor and it hit me again. I thought about Colin Kaepernick and the way that he was bringing injustice to light and how many people had an issue with it, and that added to the hurt. During this time, I know that I became overly involved in social media and way too wrapped up in the negativity that can come from participating in it, so I decided to take a break.

As I write this blog in late August, 2020, there has been another police shooting of a black man. Like many of these events, I know that there is more to the story aside from what was captured on video by bystanders. However, my initial thoughts are, “Why did they shoot him like that?” Was he reaching for a weapon? Why couldn’t they tackle him or subdue him first? Why didn’t he listen to them? HOW DOES THIS HAPPEN? I’m sure that more information will come, but in the meantime three children witnessed their father being shot by police, unrest is rekindled, a nation has probably become more divided, and many people like me are left wondering, “HOW CAN WE FIX THIS?” Like I said before, I don’t have many of these answers, but one thing I do know is that we, as Christians, need to be a bridge for this deepening divide. Additionally, as Jesus said, we are called to weep with those who weep, and there is a big faction of our nation, myself included, that has been weeping for quite some time.

If you’re able to get anything from this rambling post, I hope that it is an encouragement to spend time reflecting in God’s Word. When you are struggling with the weight of the problems of this world, I have found that the Bible is relevant and speaks to the issues of what we are struggling with and processing in times of despair. Use the Bible app, look for themes that come up in the Bible and how God and Jesus handle justice, inequality, and unity. I’d also suggest that some Christian brothers and sisters are really struggling with racism and justice in our country. In writing this blog, I reflected on Luke 10, specifically the question, who is your neighbor? Jesus says it well at the end of the parable:

36 Which of these three, do you think, proved to be a neighbor to the man who fell among the robbers?” 37 He said, “The one who showed him mercy.” And Jesus said to him, “You go, and do likewise.”