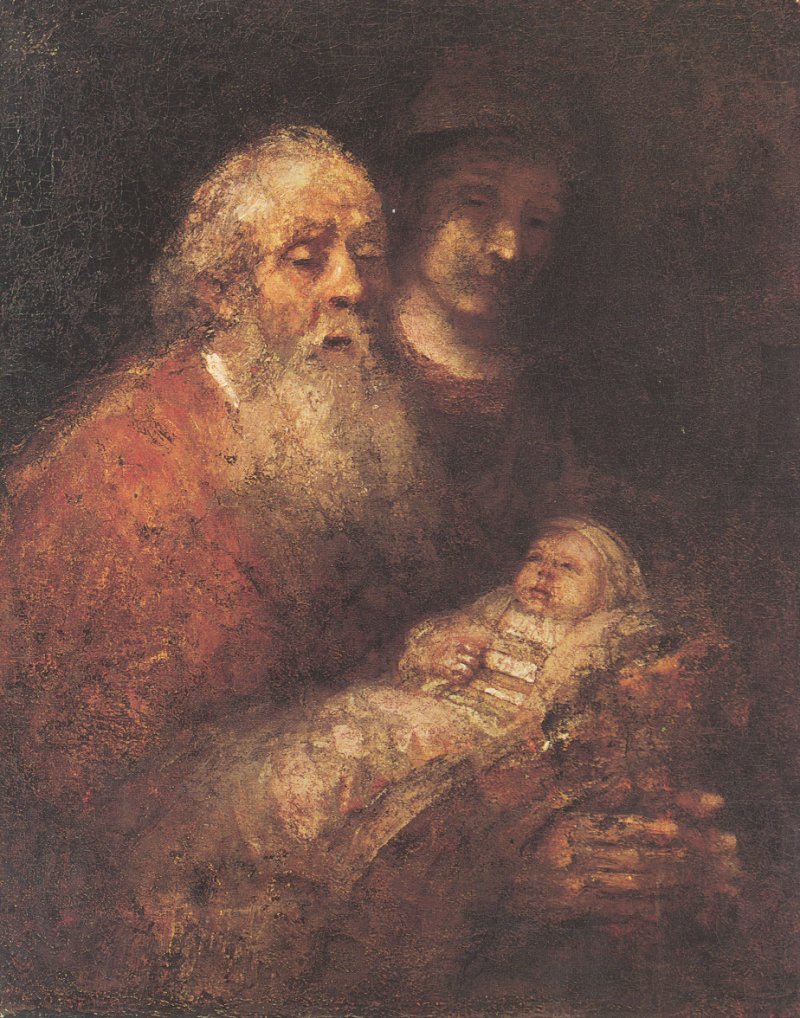 The beginning of Luke chapter 2 is one of the most familiar parts of the whole Bible. Just last week we celebrated the birth of Jesus, our Savior who is Christ the Lord (Luke 2:11). Now, shortly after Christmas the second part of Luke 2 can guide us as we continue to reflect on the significance of Jesus’ birth. After the shepherds, one of the first people to meet Jesus is a man named Simeon. Simeon is one of my favorite characters in the Bible. (I mean the one in Luke 2, not the one in Genesis.)

Growing up we had a record called “The Glory of Christmas,” which, perhaps tinted by rosy retrospection, I remember as a delightful musical retelling of the events surrounding Jesus’ birth. Before the days of iTunes and Spotify playlists, we had this album on repeat on the record player for several of my childhood Christmases. Naturally, this incessant replaying took its toll. The vinyl became scratched and the needle eventually began to skip at certain places. One such skip, the one etched in my memory, was right after the narrator told of Mary and Joseph going to the temple to dedicate Jesus (Luke 2:22).

Of course as kids we thought this was hilarious. We’d eagerly wait for it, then giggle as it skipped and repeated the line over and over till one of us stomped or smacked the stereo to move it ahead. This sequence was almost as much a part of our holiday festivities as Christmas morning stockings, manger scenes, and going to grandma and grandpa’s house. It was a Christmas tradition.

Nostalgia might be part of the reason for my fondness towards Simeon, but I think there’s more to it than that too. Simeon, as he is portrayed in Luke 2:22–35, is a wonderful character with multiple layers of significance, not only to Luke’s unfolding narrative but also for us today.

Luke portrays Simeon as exemplary in the way he read and reflected upon the Old Testament. This devout and righteous man was waiting in Jerusalem, longing expectantly for Scripture’s fulfillment. When Luke says he was “waiting for the consolation of Israel” (v 22), he is probably intentionally alluding to Isaiah 40. The language Luke uses is the same language Isaiah used to proclaim comfort for God’s people (Isa 40:1). There are also other allusions to Isaiah in the nearby context, and Luke quotes directly from Isaiah 40 just a few verses later (3:4–6). With this prophetic background in mind, Simeon clearly had some grand expectations for this child as the fulfillment of God’s promises.

Simeon’s poetic blessing in response to seeing the baby Jesus has become known as the Nunc Dimittis, which means “Now you dismiss.” (Luke 2:29) Simeon recognizes the fulfillment of God’s promised salvation as “a light for revelation to the Gentiles, and for glory to your people Israel.” (vv 30–32; see Isa 9:1–2; 40:5; 42:6; 49:6; 52:10; etc) He’s been waiting for the comfort, salvation, and revelation promised in Isaiah and through all the Old Testament Scriptures. And now the waiting is over.

Simeon’s hope is realized at this marvelous, pivotal moment in his life, in Luke’s Gospel, and in human history. The Holy Spirit has revealed to him that he would not see death until he first sees the Lord’s Christ, the Messiah (v 26). Now he sees a young couple from Nazareth dedicating their baby boy at the temple and offering two birds as atonement, a detail Luke mentions probably to point out that they did not have the means to offer the customary lamb and one bird (v 24; see Lev 12:8). Simeon is not witnessing a political movement or military revolt to overthrow Rome. He does not experience a revival of strict law-keeping led by the Jewish religious leaders of the day. Nor is that the kind of fulfillment he has been expecting. All Simeon has longed for is wrapped up in this baby he now holds in His arms.

Shaped by Scripture, the perspective Simeon represents looks retrospectively at the long-awaited hope he is seeing realized in this moment. And it also looks forward to what will come. Simeon blesses Mary and Joseph and says to Mary, “Behold, this child is appointed for the fall and rising of many in Israel” (v 34). Perhaps alluding again to Isaiah (8:14; 28:16), this looks ahead to the coming impact of the Incarnation, and to the varying responses to the anointed Savior. The rest of Luke’s Gospel and the rest of the New Testament unpack the details and theological implications of what is to come for this child.

I will always think of the story of Simeon as a Christmas story, not only because of the nostalgic skipping record but also because of the wondrous picture of fulfilled expectation and realized hope it represents. Though our vantage point is different from Simeon’s, we too see Jesus as the fulfillment of all that the Old Testament anticipates. Scripture is the backdrop against which God reveals the glory of Jesus’ birth, and of his life, death, and resurrection. The Lord’s Messiah has come to comfort and save his people. Like Simeon, we rejoice in his coming, during Advent season and all throughout the year. And like Simeon, we long for the day when he will come again.

[The painting above is one of at least two Rembrandt paintings that depict Simeon with the baby Jesus in the temple. This painting was discovered unfinished the day after Rembrandt's death in 1669.]